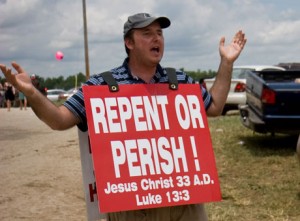 Welcome to a new series of posts about repentance. My purpose in writing these four or five articles will be to demonstrate that true “repentance” is not about shame and regret over personal misdeeds, but about exchanging faulty and fruitless ways of thinking and living for new ones that work. This can and often does involve clarifying or even jettisoning bad religious ideas, or at least badly conceived versions of them. To help illustrate how this kind of repentance works, the first Christian idea I want to reexamine is the very notion of “repentance” itself.

Echoing many voices in the bible (most notably Jesus himself), Christians consistently call on their fellow humans to “repent!” And what they typically mean by “repent!” is something like “demonstrate sorrow and regret for your personal sins and turn to religion!” This version of repentance (which has even made it into our dictionary) carries many assumptions about the legal nature of sin guilt and an obligation to contrition and right behavior as a mechanism for belonging. Especially in evangelical and other conservative streams of Christianity, “repentance” is chiefly about casting off personal sins as a necessary prelude to spiritual advancement. It’s a religious/legal transaction that (at least temporarily) puts one in a right standing before God.

While most people would agree in a broad sense that those committing bad or harmful deeds should discontinue them, the popular Christian understanding of “repentance-as-contrition” has some real problems. On a technical level, it has a lot more to do with confession and guilt than it does with actual repentance (which we’ll define in a moment). And in practice, this “repentance” often has the effect of shaming and belittling people instead of liberating them, of driving them through hoops instead of setting them free. Why does this happen? Because, as we’ll see, our misguided and incomplete view of repentance is too narrowly focused on the abstract status of individual persons and not enough on their place within world and society.

Perspective: What Did Jesus Mean By ‘Repent’?

From that time on Jesus began to make his proclamation. “Repent!” he would say, “The kingdom of heaven is here!” (Matthew 4:17)

Because Jesus used the word “repent” in his mission statement, Christians feel justified and even obligated in carrying the torch and echoing his words. But what did “repent!” mean to Jesus? Did he go up on mountaintops to tell people to stop all that sinning so they could go to heaven when they die? Was Jesus in the business of shaming people into behaving properly so God might love them?

Of course, Jesus wasn’t a magic Christian who floated down to earth to give us the correct religion. He was a Jewish prophet who claimed to herald the “kingdom of heaven” or “kingdom of God.” This “kingdom” was not a place but a reality, the “kingSHIP” or “reign” of Israel’s God on earth, as envisioned by the prophets of Israel whose legacy Jesus assumed. (See this podcast for more.) When Jesus called on his fellow Jews to “repent,” he was inviting them to “rethink” (the literal meaning of the word), to exchange one way of thinking and living for another.

A little non-biblical history might be helpful at this point. Titus Flavius Josephus was a Jewish scholar, born shortly after the death of Jesus, who worked as an historian and advisor for the Roman Empire. In his autobiography The Life of Flavius Josephus, he describes his work on behalf of the empire attempting to persuade would-be Jewish revolutionaries to suspend their anti-Roman inclinations and submit to the powers-that-be. In one instance, he pleads with an insurgent (named Jesus) to “repent and believe!,” the same Greek phrase attributed to Jesus of Nazareth in texts like Mark 1:15. Josephus isn’t inviting the brigand to get religion, but to give up his dead-end political agenda and trust Rome for a new one.

Of course, the Roman agenda was all about collusion, oppression, and domination, but Jesus’ “kingdom of God” agenda was something altogether different. In his “sermon on the mount” in Matthew 5-7 (sometimes called the “kingdom manifesto”), Jesus describes in detail what earth looks like when God is king. While typical kingdoms are dominated by the wealthy, violent and shrewd, God’s kingdom is a haven for the poor, the peaceful, and the meek. Those who “hunger and thirst for justice” are happy in this kingdom, and the sad and persecuted find a safe home there. Implicit in these details is a harsh critique of Jesus’ contemporaries. He accuses them of seeking the wrong kind of kingdom, a kingdom where the privileged dominate, the meek are put in their place, and justice is thwarted.

And it’s no small point of clarification that Jesus is not addressing irreligious or non-believing people. He’s not telling godless sinners to get religion, he’s telling believers to repent of their bad religion. Within the kingdom framework, this means not only abandoning personal and corporate sins, but adopting new ideas, agendas and beliefs that promote justice, peace, and humility. These are the attributes of kingdom people, of repentant people. Furthermore, we note that these are not attributes which can play out in doctrine or theory, or within the “soul” of an individual. The kingdom attributes can only manifest themselves in human relationships, and they can only find expression among communities. This kind of repentance doesn’t get people into heaven, it brings heaven to people.

Conclusion: Repentance As a Way of Life

Repentance might well involve a sense of shame or grief as we untangle ourselves from the bad ideas and agendas that pit us against our fellow humans and stunt our character. But no one should ever impose that shame on someone else as a fee for grace or a requirement for belonging. And far more important than guilt or contrition is the joy and freedom of adopting a new agenda that puts us in tune with God and in touch with our fellow persons.

True repentance will require us to surrender far more than our sinful personal habits, it might even cost us our religion.